Google+ Coming to High Schools Near You

It was announced this week that Google+ will soon be available to teens beginning at age 13.  This puts Google+ on the same page as Facebook and Twitter, both of which abide by the letter and the spirit of COPPA.

When the service was first launched this summer (I was lucky enough to get my beta invite while I was at ISTE in June) it was initially assumed that the age limit of 18 was to encourage more intelligent discourse.  I bought into this argument, even though a Google employee posted the day the service launched that it would eventually open up to teens, once the "right teen safety features" were in place.

Smart move on two fronts.  First, as Mr. Moore-Jones points out above, allowing the adults in first sets the tone.  Facebook started with college students (pictures of red Solo cups and keg-stands) and then added high schoolers and finally the general public.  MySpace began with bands, but was quickly adopted by teenagers and became a blaring, blinking mess of unintelligible blathering.  Google+, on the other hand, emphasizes long-form discussion, threaded comments, and public sharing (+1's).  For the past 7 or so months it has been occupied by the 18+ set, and even more so by journalists and technorati.  The level of discourse is high, even if it doesn't yet enjoy the traffic of Facebook.

Second, however, is even more important.  Google had in mind all along that teenagers need better privacy protections than adults, and they have now fully baked those protections into the social network.  Teens are encouraged to "think before posting" if they intend to share publicly.  Strangers are prohibited from contacting them or interacting with them unless they are added to a circle.  Google even built in something as simple as muting the teen when a stranger joins a hangout. 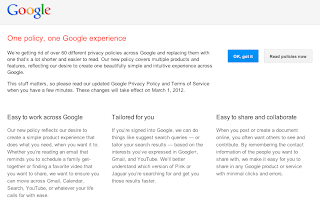 All of this is consistent, in my mind, with a company that is being thoughtful about teen safety, privacy, and "not being evil."  Google has taken a lot of flak this week about their new privacy policy, undeservedly so.  Others have explained why the new policy isn't really new, and isn't nearly as "bad" as folks seem to think it is.  I won't rehash those arguments, except to say that I assumed Google was already doing this (and in some places they were).  We have waiting for Google to consolidate a lot of disparate products into a single unified platform for our benefit.  Simplifying and consolidating privacy policies, especially after notifying the public in advance of the change, is a welcome break from other companies who make changes and announce them afterwards.

Schools are going to have to deal with Google+ for teens just as they have with Facebook, Twitter, and MySpace before them.  Some schools will block Google+, in a knee-jerk, outdated, Draconian response in order to "minimize risk" from online bullying or to "keep students focused."  For years we have heard how social media can positively affect students in the classroom, and how, if done right, social networks can actually give all students a voice in the classroom.  Any school that is blocking these sites has their collective head in the sand, in my opinion.  Instead, we should be teaching students to be well-behaved digital citizens.  When our graduates leave us and enter the real world, they will either have years of experience dealing with adults on these social networks in respectful and constructive ways, or they will have years of experience bypassing filters and firewalls.
Posted by Unknown at 4:10 PM