Apparently Baltimore, Maryland is one of the first cities to contract with ConnectedBits on a 311 smartphone app for iPhones and Android.  The City has also hooked up the service to a Twitter account which posts all of the tickets as they are opened and closed, many of them with photos.

What an awesome idea.  Smartphones are proliferating faster than any other tech device ever.  In just four years, the sales of smartphones have overtaken those of featurephones.  Everyone with one of these magic devices is suddenly a citizen journalist, a neighborhood watch member, a city inspector.  And since ConnectedBits built Baltimore's app using the Open311 standard, others can hack and add to the platform to improve the service even more.

I wasn't aware that Baltimore had been at the forefront of the 311 program.  I assumed that most cities had something like this.  I wonder how effective the program, coupled with new mobile apps, is in helping to improve areas of the city?
Posted by Unknown at 2:36 PM No comments: 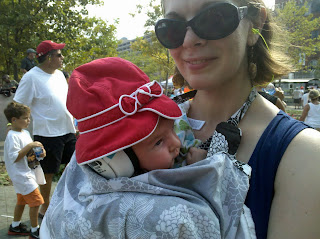 Posted by Unknown at 5:30 PM No comments:

My wife and I are addicted to The Marriage Ref. I'm not sure why.

Perhaps it's the celebrities that draw us in. Ricky Gervais, Jerry Seinfeld, Ellen Pompeo. Big name stars who are very funny.

Perhaps it's the absurdity of the fights. The stuffed dog the husband refuses to take off the mantle. The wife who spends thousands of dollars on a doll house. The husband who spends way, way, way too much time with his giant pumpkins. They're so unbelievably droll, mundane, trivial, that it contextualizes our every day disagreements and makes them seem much more normal.

Or perhaps it's just that there's nothing else on in the summer that Heather can stand.

Who knows?
Posted by Unknown at 7:25 PM No comments: